Realme X3 SuperZoom and Realme X3 are all set to launch in India today: Watch Livestream and specifiaction

In last month, Realme has unveiled the Realme X3 SuperZoom in the European market. Realme Buds Q was also previously launched in China. Read below for more information on what to expect at today’s Realme launch event and how to watch a live stream of the event.

The Realme X3 SuperZoom was released in Europe for a price of EUR 499 (approximately 42,900 rupees) for a 12GB + 256GB model and priced in India at the same price point. The company has released 8GB + 128GB models in Europe, but pricing information for this variant has not been released at the time. This model should be slightly cheaper than the 12GB model.

Realme Buds Q was released in China last month at a price of 149 CNY (about Rs. 1,600) and may be priced the same in India. Earbuds come in three color options: black, yellow, and white. Available on Amazon and Realme.com.

According to a previous leak, the Realm X3 comes with a 6.57-inch full-HD + 1,080×2,400 pixel hole-punch display and has an octa-core SOC with up to 12GB of RAM and up to 256GB. Onboard storage. It can also have a quad rear camera setup with a 48-megapixel primary shooter and an 8-megapixel secondary shooter. The RealMe X3 is said to have a dual selfie camera setup with a 16-megapixel primary camera and a 2-megapixel secondary camera. Some may even have a 4,100 mAh battery. Realme X3 runs on Android 10-based Realme UI.

Realme X3 SuperZoom has already been announced, so the specifications are known. It runs on an Android 10 based Realme UI and has a 6.6 inch full HD + (1,080×2,400 pixels) LCD display with a refresh rate of 120Hz. Featuring the Octacore Qualcomm Snapdragon 855+ SoC, it features up to 12GB of LPDDR4x RAM and up to 256GB of UFS 3.1 storage.

Regarding the camera, the Realme X3 SuperZoom features a quad rear camera setup that includes a 64 MP main camera with f/1.8 aperture. The vertically stacked rear camera module also features an 8 MP sensor with 5x optical zoom or 60x digital zoom and a periscope-style lens that provides optical image stabilization (OIS). There is also an 8 MP super wide-angle camera with an f/2.3 aperture and a 2 MP macro camera with an aperture of 2.4.

The Realme X3 SuperZoom comes with a 4,200mAh battery and supports a 30W dirt charge. For connectivity, the phone includes Bluetooth v5.0, dual-band Wi-Fi, and USB Type-C for charging. The fingerprint sensor is integrated into the power button

The realm is hosting an online event for the launch of the Realm X3 series, as the country is still addressing the coronavirus pandemic. The launch event will be live-streamed via YouTube, starting today at IST at 12:30 pm. The price and availability of Realme X3, Realme X3 SuperZoom, and Realme Buds Q will be detailed at the event a few hours later. 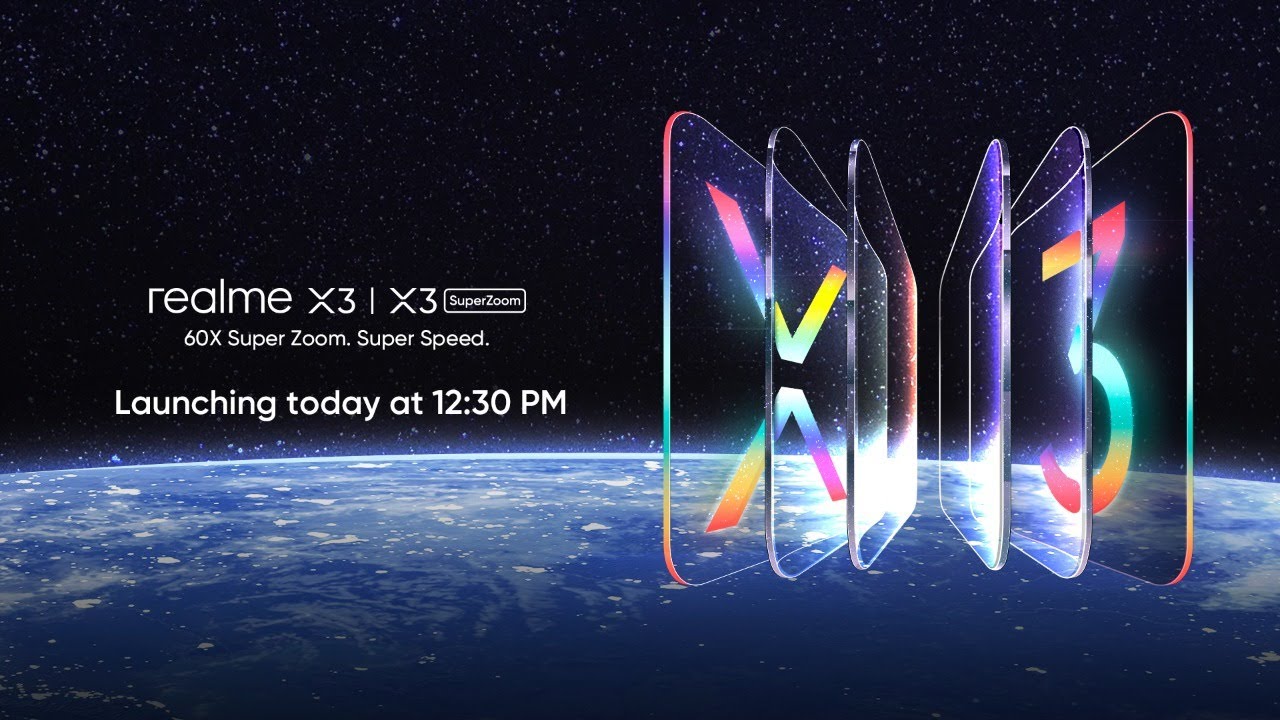